There are reasons why I would play a computer game, and more why I won’t.

But before I tell you the reasons why I won’t play a computer game, I’d like to tell you my definitions of a great game.

The only games that I’ve thoroughly enjoyed beyond comprehension were Spooky Castle of Hamumu Software (those were beautiful times), Bug Squish, Pac-Man, and Frozen Bubble.
Spooky Castle (Kid Mystic) was the only borderline RPG game that I was able to really, truly enjoy, and everything else I mentioned were games that “real” gamers would snob.

Before I get to the highlight of my story, let me give you a run down of those three fave dumb games of mine.

Bug Squish is an Open Source game whose main (and only) objective is for you to squish the mosquitoes, ticks and roaches that would attempt to drain the blood out of a human arm. Seemingly simple, but it seriously lets me release massive anger issues. You should try it! 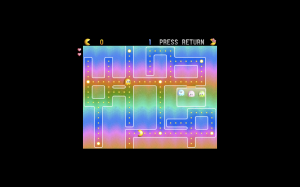 Pac-Man, well, to the uninitiated, the oldies just love this game. We’ve had this since the 80’s, and even up to today, SourceForge and other Open Source sites/orgs still offer this game up for downloading. Well, the old geeks never really lose the love for the classic games. Objective, eat em dots to oblivion… Or the end of the game. Heheh.

And lastly, my personal love. Frozen Bubble. It took me more than a year to complete all 100 levels. Such fond memories. It started out that I just really liked playing this as I took breaks from writing. Then later, I would actually play while I would listen to podcasts, because I could not stand listening to sermons without being able to do something else in the meanwhile that I try to sit still. Playing Frozen Bubble seriously just gave me the illusion that I was doing something “productive.”

NOW we go to why I won’t play a computer game.

While the last point is always open for debate, I’d like to segue to why I won’t want to play RF Online, based on this article.

This reviewer, Greg Mueller, says that RFO is rather slow with the gameplay. I believe that it’s the factor of using high-resolution graphics on a rather slow/unreliable server which caters to the whims of thousands of kids around the world.

I tried downloading RFO’s wallpapers and music and it was rather slow, for something that shouldn’t be. The good part is that RFO is offered FOR FREE, so to those who are bent on playing this game, that’s great news for you, right?

Also, Greg says that there is much of running through unadorned landscapes. Now unless I would be listening to a particularly interesting podcast here, I don’t think I’d like that much.

And lastly, this is my most compelling reason why I won’t play RFO: I never really resonated with the high-resolution RPG’s. I never really got the point of Final Fantasy, Diablo, and the other RPG’s. I think it’s because I was raised around workaholics, that’s why I’m addicted to working. Work = Play for Lorie, and I doubt that’s going to change anytime soon.

And yet, RPG’s, especially RF Online, has its qualities that may well compel me to actually play with it at one point. Wanna know? Come back on Thursday for more!