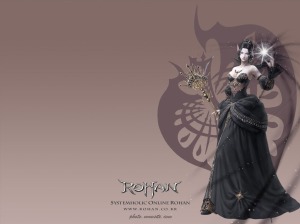 The Warlock specializes in dealing out some massive AOEdamage and crippling opponents. This build gives you a few hit points but mostly magic attack power. Its important for a Warlock to keep mobs and opponents away from them or you will die quickly.

The Dark Elf Warlock is, like all devotedly-offensive magic users in any MMORPG out there, is a dynamo of damage at the cost of being a bit on the fragile side. Anything from debilitating buffs and massive AoE spells, killing players and mobs of monsters alike should not be a problem for Rohan Online’s Warlocks. Unfortunately, staying alive can be a bit of a challenge, too.
Stat Build: The Warlock should care for little else aside from doling out as much pain as possible in the shortest span of time, so most stat points will go to Intelligence. Once in a while, some points in Vitality can help in keeping you alive, but it’s often wiser to make sure that the other guy just doesn’t get up. The Warlock should also expect to burn through his mana pool like mad but pumping Psyche up at the expense of damaging power just isn’t worth it, especially since the Warlock’s high-cost skills ensure that his mana pool never stays up for very long. Hit hard and fast is the Warlock way, and it’s often a kill-or-die deal.

PvE: Like all mage classes, the Warlock has a pretty easy time downing monsters that are usually too tough and bulky for melee classes to hack through. However, making sure that you don’t overcrowd is important because Warlocks can’t survive accumulated hits from too many monsters, and if the mob is too thick, your mana won’t hold out either, and you have no means to escape. Getting too reckless will mean lots of deaths that will just keep your XP dropping. Regardless of the mana supply generated by Mana Coil, you can only expect the boost once in every batch of monsters because the 15 second cool down will means that in dire situations, you’re better off just calculating it as part of your mana budget instead of something that you can fall back on if things get hairy. Once you get together with a party, though, things will get easier for you and your pals. The warlock’s frailness won’t matter with a tank, and your tough friend will greatly appreciate you providing a means to deal with mobs quickly. Dungeon crawls at low levels is particularly deadly for you because your AoE spells aren’t that great, and having a healer pay attention to you instead of the tank might get all of you killed. Just explore dungeons later, when you have Rise Root, Pollution Mind, and Magic Push. Pollution Mind stuns mobs for your party mates to clean up, and Magic Push followed with Rise Root makes sure that you can squirm out of tight spots.

PvP: Warlocks are good in PvP, mainly because once they start hitting, the other guy won’t really have much time to hit back. The downfall, similarly, is the low mana pool. Running out of mana means losing which basically means that outliving the first barrage of spells is equal to killing you. Treating melee classes like mobs with Magic Push and Rise Roots have the same effect: they’re immobile and away from you to shoot at your disposal.