There is a phenomenon in mobile gadgetry, and it’s not exactly new. From the eastern shores of Asia comes the ultimate in mobile telephony convenience: the Dual SIM phone.

A Dual SIM phone is a cellular phone with a twist: it can house two SIM Cards (Subscriber Identity Module) in one phone. Thus, you can operate two plan-based or two prepaid (or even one plan-based and one prepaid) phone lines, in one phone. Pretty convenient, if you’d have a need for it.

The Dual SIM phone was first launched internationally by Singaporean tech company Verzio, to cater to the world’s biggest base of texting consumers: the Philippines. Almost simultaneously, a local company, Solid Group, also saw the Filipinos’ text addiction as a launch pad of a new line of mobile electronics. Thus, the My|Phone and the Verzio phones: Verzio Duplii and Verzio Twinn, entered the market around the same season.

Close on their heels, other Dual SIM and even TV-bearing mobile phones also flooded in from the factory capital of Asia, Mainland China. And not long after, Samsung launched its first Dual SIM slider phone. A little while later, while Philips launched its new Dual SIM phone line, Samsung also rolled out its first candy bar Dual SIM phone. Thanks to this Dual SIM innovation, a new level of mobile telephony was ushered in. Not just in Asia, it’s also quickly catching on in Eastern Europe and America as well.

The real question here is, why would anyone want a Dual SIM phone anyway?

As you can see, there are quite a number of reasons why you may need a Dual SIM phone. If you see yourself in any of the descriptions up there, you may well need one. Get a Dual SIM phone from China, and you’ll no doubt get a mobile TV thrown in, as well.

Speaking of Dual SIM phones and Touch Screens, my friend Lorie shares that she just got herself a free Dual SIM phone from a cellular phone service plan in my country. The My|Phone T13 is a phone that has both features from our previous articles: the Dual SIM card, and the Touch Screen.

While the My|Phone T13 may not be available outside the Philippines, you can order it from dealers; it’s easy to send things abroad, and even to pay for goods nowadays, anyhow.

Lorie related to me these observations regarding the My|Phone. We’re here to give you an understanding whether it’s for you or not.

The My|Phone T13’s biggest strength is the main reason why a user would buy it in the first place: it’s a far more reliable Dual SIM phone than any other generic China Phone. Texts come in, without hitches, in the right SIM Card, and get sent, also without hitches, from the SIM Card that you choose to send it from. This is perfect for those who have a cellular service plan subscription, as well as a prepaid service subscription: if you run out of prepaid credits on your prepaid SIM, you can temporarily call or text from your plan-subscribed SIM.

Calling is also seamless. Your friends can call you from either SIM card, and the call goes through sans problems. One thing that is yet to be tested, however, is if a call would come in, in another SIM card, while one has a call on the other.

The My|Phone T13 is so easy to use, that it’s almost like a Nokia phone. It has Bluetooth, a media player, and a camera, and even an FM Radio. It’s all you need in a candybar package.

On a step higher than the standard features, you get the touch screen functionalities of the My|Phone. When Lorie gets tired from using the keypad, she avoids calluses on her thumbs by using the stylus and the touch screen instead.

On the other hand, my friend does have a few complaints about the My|Phone T13:

Despite her gripes, Lorie still loves her My|Phone T13. Like a boyfriend she’s committed to for the long haul, she’ll take her My|Phone, flaws and all.

On the whole, the My|Phone is a great Dual SIM card phone option. It sure beats the anxiety a consumer will get when purchasing an unknown-brand China Phone, complete with the kitsch of being a Nokia phone knockoff, the funny incongruous buttons, and the equally horrid font. The only plus you’ll get from the China Phone is that most of them include TV’s at a price you won’t be able to resist. 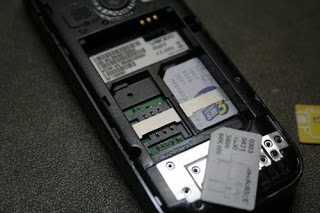 When it comes to phones, most people would want something that has a camera, ultimate connectivity and 3G capabilities, even WiFi. But I…

I want a Dual Sim phone.

In the Philippines, it’s soo unavoidable to NEED more than two sim cards. Because of Sun Cellular’s ingenious Unlimited Call and Text services, they had revolutionized the way consumers use cellular phone technology, and maximized the value for the customer.

Unlimited call and texting, or “Unli,” as it is affectionately called by the locals, has created a need for at least two cellphones, for the average Juan. And yet, don’t you think it would be funny, not to mention bulky, if a person would need to carry two phones? What if the person needs the ultimate in tech and would like to have two 3G-capable phones? Two Nokia Communicators or two Nokia 3G-Capable phones, anyone?

But there is good news. As mentioned, my current technolust includes dual sim phones. With these phones, you can now use two sim cards from one phone, and text your friends in one network, as well as other friends in another network. In the Philippines, this would ensure that your textmates would reply to you, because most likely, they are on Unlimited texting/calling, too, and won’t have spare prepaid credits, called “load,” for other networks.

Though the Dual Sim phone players are mainly Chinese manufacturers, another Asian player also entered the scene. Verzio, a Singaporean company, released their high-end dual sim phones in late 2007. They are one of the few reliable companies who have entered the Dual Sim battlefield.

There are two other key players in this arena: Philips and Samsung.

While Philips’ Dual Sim phone (Xenium 9@9w) is of the “switching” kind, meaning only one sim is active while the other you will need to press a few buttons to activate, if you are using your other sim as backup only, this is surely more reliable than the Chinese phones.

On the other hand, if you want both sims to be active at the same time, you could try the Verzio phones. Or, if you have cash to spare, you could go for the Samsung dual sim phones.

Samsung’s dual sim phones are decently featured: they have Java, bluetooth, and GPRS. They also have video-capable cameras: one is 2MP, the other is at 3.1MP. The Samsung D880 had been launched late last year, while the D780 is yet to have reached the local stores, though it was announced that they’d ship out in May.

While Verzio’s Duplii model seems to be a better buy, with the 3G capabilities and all, I seriously do not like the keypad layout. Not to mention that according to this review, even über-techie YugaTech got puzzled with some Verzio Duplii controls.

In my opinion, choosing the right Dual Sim phone entails much consideration. Tomorrow’s article discusses my standards for a good Dual Sim phone.

Thank you for the photo: